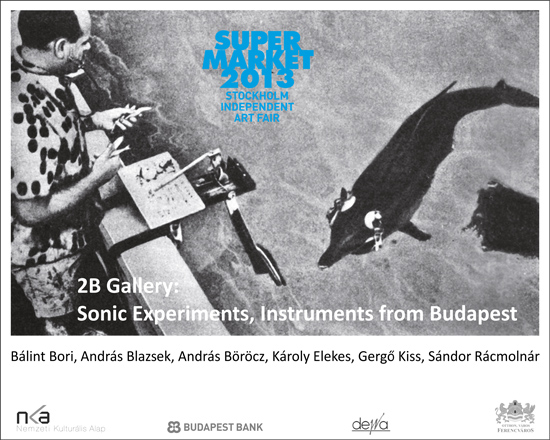 Our selection is music and sound related, either in form or function; some also make noise. The chosen pieces display an unusual use of materials, a desire for experimentation, a sensibility towards an innovative point of view; qualities that we think best represent – in Scandinavia- the philosophy of our gallery and the spirit of our exhibitions.
Our exhibition entitled Bartók’s Bugs in 2007 commemorated the centennial of the composer’s birth. The concept of the exhibition focused on a lesser know passion of Bartók besides collecting folk songs: his collection of insects. We will show three pieces from this exhibition.

One of these is a piece entitled Prairie Design by Károly Elekes. The artist painted a three-meter-long plank red and green, and stuck 81 pocketknives from his own folk art collection into it. The knives are open at different angles and signify musical notes. The various carved and pearl-encrusted knives form the notations for a folk song “My baby is ploughing”, recorded by Bartók Béla in Gyula in 1905.

The other piece is Sándor Rácmolnár’s Compilation of Silence. It consists of a series of bakelite records, placed on the wall in a particular configuration. From a distance the viewer can see curious large insect etched into the surface of the records. These creatures are composed of musical symbols: the notes, clefs, breaks configure the head, thorax, antlers, abdomen of the bugs. The etching on surface has made the records unplayable, the bugs are the cause of the compilation of silence.

Current Berlin resident Bálint Bori has been featured at several of our exhibitions, including Bartók’s Bugs. His ringing, clinking, chirping objects became known as Cicadas. These sculptures are made of various found objects, mostly colorful exotic cans and metal boxes, and powered by solar energy. In the interior of the sculpture metal strings are hidden that are activated by solar battery-powered motors. Much like real cicadas – an insect family of amazing variety – which transform light into mechanical energy and then into sound.

We also had other exhibitions which dealt with the boundary between visual and aural arts. In 2010 our +3dB exhibition – connected to the Contemporary Music Festival – featured sound installations. From this exhibition we will show Gergő Nagy’s work entitled Bi.polar in Stockholm. Bi.polar depicts a sine wave composed of 9 individual sheets of metal, which move from a motor attached to them that turn on one after the other, simulating the movement of the wave.
The other piece is from András Blazsek, who was featured in our 2012 Synesthesia exhibition. His sound installation is based on interviews conducted with blind and visually impaired persons. This work was born out of collaboration, the artist’s partners in it, in addition to the interviews, mixed sounds from their real or imagined environment on a computer program. It depicts the peculiar relationship of persons living with blindness have to sound in lyrical way.

Artist András Böröcz, who lives and works in New York and is the co-founder of 2B Gallery, created his works carved of walnut related to the Jewish feast of Purim in 2001. According to tradition the rattles must make noise when the name of Haman, who wanted to kill the Jews, is heard during the reading of the Book of Esther. The On the Tip of His Tongue was originally part of an eleven-piece series, which has been exhibited at the Jewish Museums of Philadelphia and Budapest, among other venues.